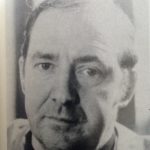 Stuntman Derek Ware, who has died.

Derek Ware, the stuntman who founded the agency HAVOC who provided much of the trademark action of the Jon Pertwee era, has died. His association with Doctor Who went back to the very first story, for which he arranged the fight between caveman Kal and Za, as well as doubling for actor Jeremy Young.

He subsequently arranged the fights on several 60s stories. For Marco Polo (1964) he co-ordinated the scimitar fight between Marco and Tegana and on The Aztecs he marshalled the climactic cudgel face-off between Ian and Ixta. Sword fights on The Crusade(1965), The Myth Makers (1965), and The Smugglers (1966) followed – in the latter he also took the role of the Spaniard, ruefully noting that the character lost his lines and looks once he had been cast. Having been memorably impaled in the chest by a sword on The Crusade he was rehired by director Douglas Camfield in acting-only roles as an uncredited bus conductor in the final scenes of The Chase (1965, which Camfield, not the story’s main director Richard Martin, oversaw) and as the Egyptian messenger Tuthmos in The Dalek’s Masterplan (1966). In fact, Derek trained as an actor at RADA and so his acting chops were never in question: indeed Camfield also cast him in a memorably ominous episode of The Lotus Eaters (1972). 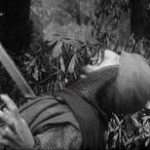 A grim death as a Saracen Warrior in The Crusade.

Having overseen the fights in The Underwater Menace (1967) and The Web Of Fear (1968 – specifically the stunning Covent Garden massacre which proved a highlight when the story was returned recently) he came to benefit the show for a couple of years with the stunt team he formed, HAVOC. Reasoning that it was better to have a group of stuntmen who all specialised in various skills, he provided the riders, fallers, drivers and horsemen who fought and died in various entertaining ways during Jon Pertwee’s first to years.

As Private Wyatt in Inferno, about to take a tumble.

HAVOC made a splash in The Ambassadors Of Death (1970) with a memorable warehouse fight in episode one and then a spectacular helicopter hi-jack in episode two : Ware himself playing the UNIT Sergeant who takes a tumble for the whirlybird. Camfield was back for Inferno (1970) casting Ware as Private Wyatt: for his character’s big  plunge from a 50ft a gasometer Ware was himself doubled by Roy Scammell who was HAVOC’s high fall expert. Ware’s most fulsome praise for his work on that story though was Jon Pertwee because the leading man  had chronic vertigo but gamely performed his scenes on the towering gantries anyway.

The incomparable Pigbin Josh about to get absorbed by Axos.

Ware enjoyed working with Michael Ferguson on The Ambassadors Of Death and was delighted to provide a fight between Bill Filer and his Axonite doppelgänger in The Claws Of Axos (1971 – Ware providing the back of head shots to double for Paul Grist). He also, memorably, played one of the most bizarre characters ever to shamble into Doctor Who – Pigbin Josh, the tramp who can only say “Ooh-arrr” and who takes a tumble into a freezing river on the coldest day of the year.

Having provided Terry Walsh to double for Jon Pertwee Derek found himself squeezed out of Doctor Who when Walsh proved to be a cheaper option than a whole stunt team. Complaints from other stuntmen that HAVOC had a monopoly on the available television work meant that his own union changed the rules and the agency was dissolved. He always felt that he had been treated unfairly but it didn’t diminish his appetite for work nor his gentlemanly conduct when he was performing it. 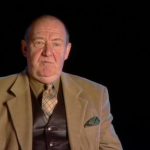 He was happy to contribute to the Doctor Who DVD range.

He never returned to Doctor Who (he wasn’t impressed with later manifestations of the show anyway and turned down an overture from producer John Nathan-Turner) but he carried on arranging stunts on stage and screen, as well as imparting his wisdom and experience to budding students – indeed for many years a Derek Ware Prize was awarded at RADA for the best fight based around a classical text.

He was happy to reminisce bout the show for the Doctor Who DVD range and that was where I was reunited with him: first on the commentaries for The Mind Of Evil and The Ambassadors Of Death but most rewardingly for the documentary Hadoke Vs HAVOC on which he told the story of assembling that acclaimed TV stunt troupe and was reunited with some of its surviving members. I had first met him when he taught me how to fight when I carried a spear (and a sword and an axe) in the 1990 Ludlow Festival production of Macbeth – his last production after a rewarding 21 year association with the annual Shakespeare-In-The-Castle there. I was delighted when he came to ours for lunch and brought a copy of the documentary Dying For A Living which focussed on him and his stunt work. At the time he was hoping to have his own series on the history of sword fighting – Code Duello – commissioned but despite shooting a taster tape with a voice over from his friend Robert Hardy this never materialised. 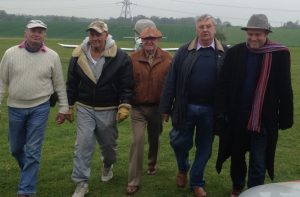 Derek (centre) reunited with his HAVOC colleagues (plus one new member) in the documentary Hadoke Vs HAVOC.

He was a funny man (his father, whom he never really knew, was a stand-up comedian) but also a gentleman who had great stories and a true appreciation of his fellow professionals. If the business had let him down on many occasions it never managed to make him fall out of love with it and he was always happy to help with projects which could benefit from his memories and wisdom.