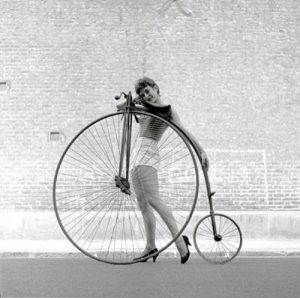 The actress Frances Pidgeon who appeared twice in Doctor Who has died at the age of 84. Her first role was an uncredited one, as the non speaking handmaiden of Queen Thalira in The Monster Of Peladon (1974). Her second role was more substantial, as Miss Jackson, the assistant to Professor Watkins in The Hand Of Fear (1976). The uniting factor of these two stories was director Lennie Mayne, to whom Pigeon was married until he was lost at sea in an accident in 1977.

Born in Epsom in May 1931, the tall, athletic and beautiful Pidgeon was a ballerina and dancer in musicals : an early appearance was in 1947-48 in Alice In Wonderland at the Shakespeare Memorial theatre (later the Royal Shakespeare Company) at Stratford-Upon-Avon. Mayne was an Australian who also began his career as a dancer and the pair worked together on stage, notably in 364 performances of Cole Porter’s musical Can-Can at the Coliseum in the West End in 1954/55. They married in 1956 and had twin girls in 1964. 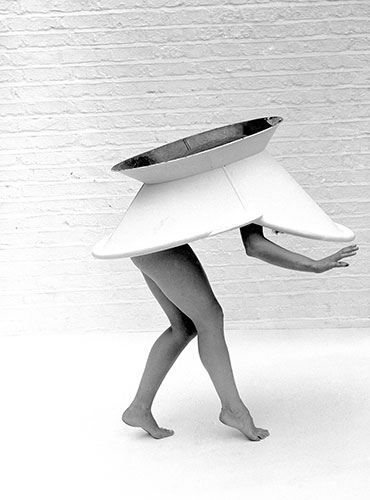 Pidgeon demonstrates an “Alternative Use For A Hip Bath” in another of Russell’s experiments in still photography (© Topfoto).

In 1956 she was picked by Ken Russell to be the subject of various photographs he took which showcased her beauty and married it with surrealistic props – in one her bare legs emerge from beneath a tin hip bath, in another she wears a lampshade as a skirt. She and Russell had danced together at the London Theatre Ballet and hung out together at the Troubadour coffee bar.

She was one of the supporting ensemble in the Mike Yarwood and Lulu vehicle, the series Three Of A Kind (1967) and gradually began to take small roles on television, often in productions directed by her husband such as Doomwatch (1971/72) and The Brothers (1975). 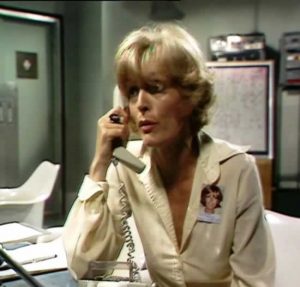 Pidgeon as Miss Jackson in Doctor Who’s The Hand Of Fear.

There is no particular of nepotism here because Mayne – a universally adored figure – surrounded himself by people he knew when he was working, whether he was married to them or not. The number of productions in which Pidgeon and Mayne’s names also intersect with those of Denys Palmer, Rex and Pat Robinson (Patricia Prior) or Laurie Webb (all of whom appeared in Mayne’s The Three Doctors) are numerous and comprised a mutually supportive and respectful unit of artists and friends. The Robinsons and the Webbs lived very close to Mayne family as well and helped to provide a support network for Pidgeon after Mayne’s tragic death.

She had been in ill health for some time and passed away in December. The twins survive her.