HG And The H-Bomb 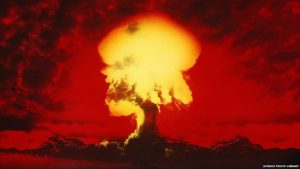 Examining the extraordinary role of HG Wells in the creation of the nuclear bomb 70 years ago –  how a simple, devastating idea led to the world we know today.

In his 1914 novel The World Set Free, Wells imagined bombs that destroy civilisation and lead to a new world order. But his “atomic bombs” – a name he conceived – are grenades that keep on exploding.

How did this idea become a reality?

The very talented (and sunniest, most charming fellow) Simon Guerrier asked me to provide a few voices for this documentary presented by Samira Ahmed and co-produced by another talented and charming Guerrier (there must be something in the family porridge), Simon’s brother Tom.

It’s quite an eclectic array from Yours Truly but hopefully they don’t all sound like me – and if they do I hope it doesn’t detract from what is a fascinating documentary which can be heard here until early August.