I wanted to do an update in September entitled “Oh f*ck…” because after a year of being pretty clear I went on holiday, to the sun. By the time I came back, I knew that the tiny little flecks of colour on my skin, and the fact that I felt a bit itchy and uncomfortable, meant that my psoriasis was on the march again. I thought it might be useful to chronicle its unwelcome return to my too too unsullied flesh as it happened. But in a way, I felt that might aid it in its campaign to take root on my body again – plus I was a bit depressed about it – so I didn’t. Now, however, I have an approaching deadline for a play I am meant to be writing, so what better time to give you all an update…?

As we know, the sun can really help clear up the skin, so a week of Verona’s beautiful Vitamin E flavoured illumination, plus the resultant relaxation, would only be good. 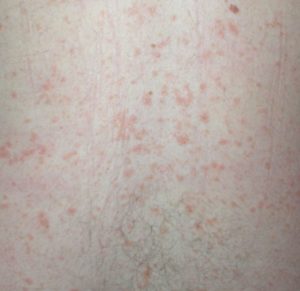 It’s when it spreads from the usual places like the arms and ankles to the less commonly afflicted parts like the back that you know you’re in trouble.

I had been a bit worried by all the stuff I read in the papers about Doctors prescribing too many antibiotics and how bad that can be. So I asked Dr McBride if perhaps I should give my body a rest. She didn’t really think I should but said that if I was going to it would be safer over the summer when my likelihood of picking up a throat infection would be minimised. What she didn’t tell me to do was give up taking them just before gong on an aeroplane with all its recycled air and close proximity to other people’s germs. But I did. And so I picked up a bit of a streptococcal throat infection and despite the success I have had with my biologics, my arms – and gradually the rest of my body – started showing the tell tales signs of an outbreak. My body temperature also fluctuated and I was extremely agitated by the itchiness that dominoed with goose bumps all over my frame. At one point I thought that these metamorphoses would lead to a spell in hospital, as the last time I’d had a similar resurgence it didn’t abate until it totally wiped me out. I’m used to the odd period where the back of my arms or my elbows and knees have discolouration and dryness, but when the softer skin of the torso or that hardier suff on the back of the hands start showing signs of plaques I know I am in a bit of trouble.

This has been a bit of a bind. Just as there’s an argument that loving and losing is a hell of a lot more painful than never having loved at all, I was perhaps knocked sideways a little because I had started to take a pain free, smooth outer shell for granted. It looked like I was about to be plunged into a revisitation of the dark old days and so I got not a little distressed (which, of course, helps the condition to wage its war). Fortunatley, Doctor McBride wasn’t too concerned, reassuring me as ever that this was normal and that even if it turns out that the biologics aren’t strong enough to help me then there are other options and I mustn’t despair. For now though, the blame is firmly on the sore throat – so back on those antibiotics – and I’m continuing my treatment as before, but with a greater attention to the application of creams and lotions in order to manage this upsurge in plaques.

A couple of months later and I am still covered – but it is not as widespread nor painful as previous major outbreaks. It is a disappointment after such a period of fantastic progress, but it is certainly not as bad as it has been in the past. Everything is relative. I’m mostly stricken on the back of my arms, my knees and the back of my ankles, but it is not too flaky nor is is cracked and raw. I didn’t have to do to hospital and the itching has abated. So while I don’t especially like what I see, I know all too well that I could be feeling a hell of a lot worse.

In the meantime, the other side effect of the holiday is a massive rise in my cholesterol (8.5 having been at a brilliant – for me – 5.2) which is cause for serious concern so I have had to employ the services of a personal trainer and am actively eating and supplementing myself with things specifically designed to make this high figure drop. My blood tests in Decemeber will indicate just how happy a Christmas I will be allowed to have.

Lessons learned – (i) Don’t stop taking prophylactic antibiotics before getting on a plane and (ii) the Italians may well have a relaxed attitude to the consumption of wine and ice cream, but you are not an Italian (iii) it could have been a lot worse.

I had a lovely holiday though. Sun, sea, sand … the scabs didn’t come till later!